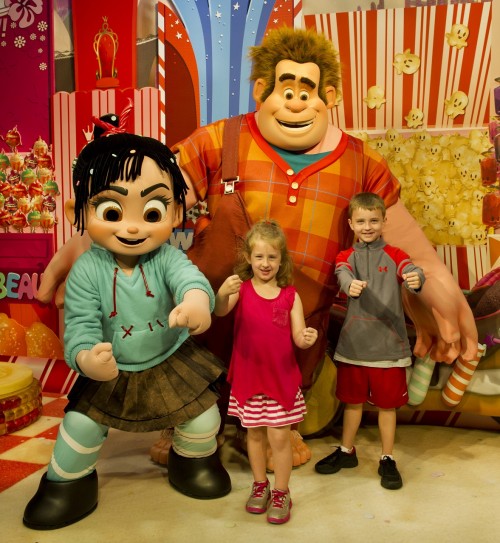 Wreck-It Ralph and Vanellope Von Schweetz, from Disney’s newest animated adventure comedy “Wreck-It Ralph,” are now available for photos in a new character meet and greet experience at Disney’s Hollywood Studios. Guests visiting The Magic of Disney Animation attraction are invited to step through Game Central Station, a key location from the film, where they’ll catch glimpses into various game worlds on their way to a meeting with Ralph and Vanellope in the candy-coated cart racing game, “Sugar Rush.”

Ralph: As the bad guy in the ’80s-era, 8-bit game “Fix-It Felix, Jr.,” Ralph is tired of being overshadowed by the good-guy star of the game. Ralph sets out on a game-hopping journey across the arcade to prove he’s got what it takes to be a hero.

Vanellope: A feisty misfit from the candy-coated cart-racing game “Sugar Rush,” Vanellope Von Schweetz wants nothing more than to join the ranks of the “Sugar Rush” racers.