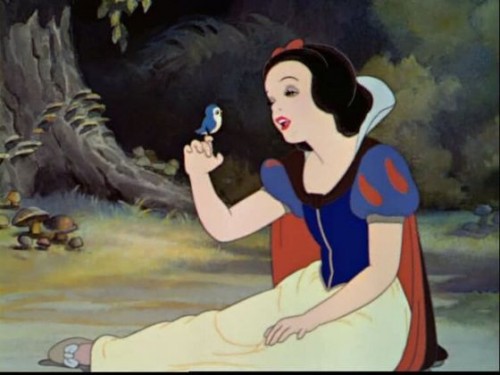 Walt Disney’s original animated masterpiece, “Snow White and the Seven Dwarfs,” is still the best Disney animated film in my opinion. No other film set new artistic standards and created an industry like Walt’s first animated feature. This year marks Snow’s 75th anniversary and the film will be celebrated with a state-of-the-art digital presentation at the New York Film Festival on Saturday, Sept. 29 at the prestigious Lincoln Center’s Alice Tully Hall. The film will be introduced by acclaimed animator/director/historian Eric Goldberg, who served as supervisor of the Genie character in “Aladdin,” co-directed of “Pocahontas” and counts “Fantasia 2000” among his credits. Festival attendees will also get a sneak peek at Walt Disney Animation Studios’ newest animated short “Paperman,” an innovative new animated film that combines the best of both the CG and hand-drawn worlds. “Paperman,” directed by John Kahrs and produced by Kristina Reed (and utilizing Goldberg’s animation talents), will open in theaters in November with the hilarious arcade-game-hopping adventure “Wreck-It Ralph.”

“It’s an honor to be introducing ‘Snow White’ at this year’s New York Film Festival, marking the film’s 75th anniversary,” said Goldberg. “Walt used to refer to ‘Snow White’ as ‘the one that started it all,’ and he was right. The storytelling, the emotions, the cinematics and the comedy are all so true and so powerful, it’s astonishing to think this assured piece of filmmaking was the studio’s first feature effort. Anyone who is working or has worked in the animation medium owes ‘Snow White’ a huge debt, as it never ceases to inspire us. Walt and his team created something that is timeless: it isn’t a question of whether ‘Snow White’ is lacking in surround sound, computer graphics or stereoscopic 3D, it’s whether today’s films can measure up to ‘Snow White.'”

“Snow White and the Seven Dwarfs” premiered on December 21, 1937 at the Carthay Circle Theater in Hollywood, and was the first animated feature film produced by Hollywood. More than 750 artists worked on the film, which took three years to produce. The film received a special Academy Award® in 1939, consisting of one full-size Oscar® and seven dwarf Oscars, presented to Walt Disney by Shirley Temple. The film became the highest-grossing motion picture up until that time, and held that distinction for two more years (until it was surpassed in 1939 by MGM’s “Gone with the Wind”).

“Snow White and the Seven Dwarfs” was the culmination of Walt Disney’s dream to make a full-length animated feature. He had seen a silent version of “Snow White,” starring Marguerite Chapman in 1917 (when he was just 15 years old), and the story made a tremendous impression on him.

Just as “Snow White” pushed the boundaries of the medium, the newest Disney short “Paperman” introduces a ground-breaking technique that seamlessly merges computer-generated and hand-drawn animation techniques to tell the tale of a lonely young man in mid-century New York City, whose destiny takes an unexpected turn after a chance meeting with a beautiful woman on his morning commute. Created by a small, innovative team working at Walt Disney Animation Studios, “Paperman” pushes the animation medium in an exciting new direction.

Does anyone remember the Snow White 50th Anniversary Parade at Disneyland? They used to do events like that for anniversaries of the big films. But these days, nothing (unless it’s somehow tied to a merchandise event). Here’s a video of the 1987 parade: