Universal Studios Hollywood has had an on again, off again plan to do something with the unused portions of its property since at least 2006. (Actually, it goes back even further than that with a plan to house a giant animation studio there at one point.) Up until earlier today, the latest plan called for a giant residential and office complex to be built on the property.

That part of the plan never made much sense to me, nor to some of the Los Angeles city council members who would have had to approve it. Today, NBCUniversal announced that they have modified those plans to remove the residential focus.

Instead, the new plan puts a larger focus on entertainment, parking, and studio support. Actually, this has likely been coming since they first announced that there would be Wizarding World of Harry Potter expansion added to the grounds. There just isn’t room to really expand the park and do the sort of mixed-use planning Universal really wanted. 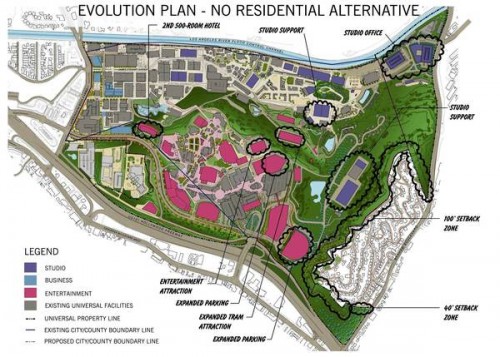 Right now there is not much more detail than what’s in the above map. But have a look and tell me if you think any of those new expansion areas are suited to house the boy wizard and his friends.

Eventually more details will be added to the project’s public website. Right now, it’s just a shell with all the old info gone.