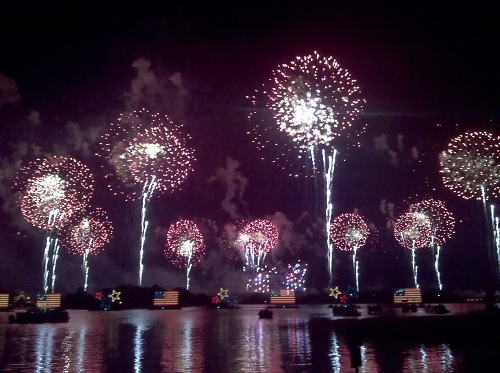 Walt Disney World announced their plans to illuminate the night skies with special pyrotechnic shows for our nation’s independence holiday. It’s a weird week with the 4th of July falling on the Wednesday but that won’t stop Disney from showing a wide selection of shows, including a patriotic display at Magic Kingdom, a rock’n’roll spectacular at Disney’s Hollywood Studios and a classic sky show at Epcot infused with an Independence Day finale.

Here’s how you can celebrate America’s birthday while at Walt Disney World:

In addition, Epcot guests may lend their ears to “Voices of Liberty 4th of July Concert” and meet with Benjamin Franklin, Betsy Ross and Disney characters adorned in patriotic dress at American Adventure.

Since the Magic Kingdom will also have a show on Tuesday night, you will only have to pick whether you want to watch at DHS or EPCOT on the 4th. I would recommend catching the EPCOT show, the finale is not to be missed. Plus the Voices of Liberty concert is a treat. Also, I find the MK show is actually a little better when viewed from the Polynesian Beach. The music is pumped in from everywhere and the barges from the Electrical Water Parade add an element you can’t get in the park.

What’s your plan for the week?