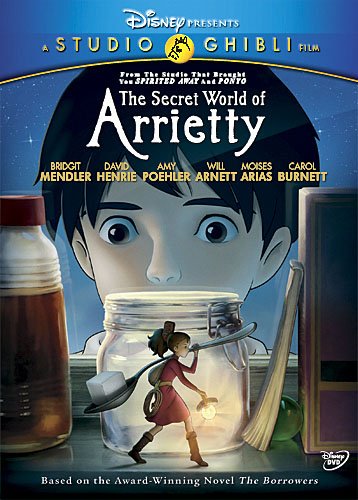 Last week, Disney, through its North American distribution partnership with Japan’s Studio Ghibli, released three more titles from Ghibli’s catalog on DVD and for the first time on Blu-ray: The Secret World of Arrietty (2010; 2011 in North America), Whisper of the Heart (1995) and the studio’s first official film, Castle in the Sky (1986).

Both Whisper of the Heart and Castle in the Sky were previously released on DVD in North America, but even if you own them, consider the upgrade to Blu-ray.  The transfer on Castle in the Sky in particular is jaw-dropping.

Special features are sparse, though both Whisper of the Heart and Castle in the Sky offer some brief glimpses into Studio Ghibli’s processes as a whole, including interviews with animation legend Hayao Miyazaki, where he discusses his thoughts on characters and his audience.

Unfortunately, The Secret World of Arrietty, the newest production of the three, arrives on a nearly bare-bones disc, with an original storyboard viewing option the only extra worth your time. There are two music videos on the disc as well, though Bridgit Mendler’s “Summertime” seems pretty out of place (the price to pay for having such a well-done transfer of the film).

If you haven’t taken the opportunity to experience some of Studio Ghibli’s films, they’re worth the time. John Lasseter considers Miyazaki one of his heroes, which is not only why Miyazaki’s Totoro character appears in Toy Story 3, but why Lasseter also provides an introduction to Castle in the Sky on this Blu-ray release. The Ghibli films definitely have a different sensibility and pacing to them than many of Disney’s animated films, but they’re wildly inventive and full of heart. As added motivation for picking up these discs, Amazon is currently offering $8 off when you purchase two Studio Ghibli Blu-rays.