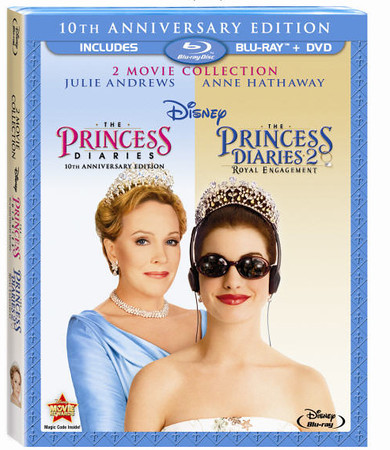 Yeah, I know this is just a big marketing gimmick by Disney Consumer Products to get you to buy more Disney Princess

merchandise or to shop at Target, which makes me wonder why they’re not promoting The Disney Stores since selling the magic at Target and Walmart is party of what doomed The Disney Stores in the first place. But hey, it’s Julie freakin Andrews. Also, Ican’t believe it’s been 10 years since the Princess Diaries was released. That’s scary. Anyway, here’s the press release. Shop in good health:

Beloved Academy Award-winning actress, singer and best-selling children’s book author Julie Andrews, in collaboration with Target and The Walt Disney Company, introduce the first annual National Princess Week. During this enchanting week-long event, taking place April 22-28, children across the country are invited to celebrate the sparkle and wonder of every princess – real, aspiring or imagined.

“Throughout my career as an actress and author, I’ve encouraged children to use their imaginations and dream big,” said Julie Andrews. “Joining Disney and Target to create National Princess Week is an extension of my work – a moment in time for children to celebrate their individuality and let their inner sparkle shine.”

Throughout National Princess Week, Target will showcase a variety of products designed to engage every princess, including:

“Disney and Julie Andrews have inspired the imaginations of generations of children and families,” said Casey Carl, Target’s senior vice president. “We’re excited to bring that magic to Target guests everywhere and offer them an opportunity to create a princess experience through re-released Blu-rays, books, toys and other merchandise.”