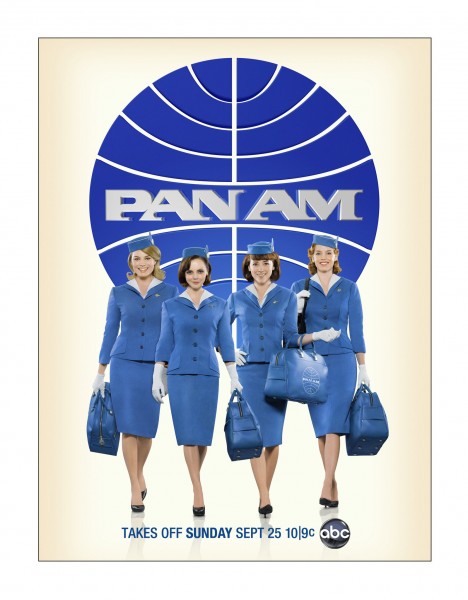 Pan Am has drawn comparisons to several fan favorite shows. After Sunday night’s premiere, I like to think of it as a slick hybrid of Desperate Housewives’ drama and Mad Men retro-style. Being a Pan Am stewardess is no easy task. As we come to find out, Pan Am’s stewardesses can only fly until they get married or turn 32. The stringent look policy for the women includes stockings, a girdle and a properly positioned hat.

The pilot episode takes place at the height of Pan Am’s heyday. The company’s newest jetliner, the Clipper Majestic, is preparing for its maiden voyage. And like any good debut, there are problems.

That’s where we meet Maggie, played by Christina Ricci. So far, this role seems like a departure from Ricci’s darker, angst-filled roles she has typically been typecast to play. It’s a good fit for Ricci, who has an elegant stride and grace about her. Could she be hiding secrets behind her smile? It should be interesting to see how Maggie progresses this season. There’s a little too much polish to her. The stewardesses’ highly competitive and superficial working environment lends it to harbor a saboteur.

Pan Am does a wonderful job at portraying the hope and innocence of a day gone by. The excitement in the airport that we see in the first episode is most definitely dated.

One confusing storyline is that of Kate. We find out within the first five minutes she is pulling double duty as she takes on her first “assignment,” to replace a passenger’s passport with a phony. The story here was still ambiguous at the end of episode one, and quite honestly, seems the most outlandish.

It is obvious that the producers of the show had difficulty finding a cooperative airport to film the show. While shots of the fuselage look realistic, the shots of the plane in the air and even the airport itself are quite fake. The takeoff scene from Sunday’s episode was regal, if not a bit silly. As the music swells, and the Clipper Majestic takes off for the first time, Maggie quips with a smile, “buckle up…adventure calls!” The contrast between the darker story lines and the stewardesses’ primped outward appearance was nearly too stark.

Colette is the most adventurous, if you will, of the Pan Am ladies. She sets herself up for disappointment when she recognizes a man she met from a previous flight, only to meet his wife and child moments later. I feel confident that this will become a patterned behavior for Colette and that we’ve yet to see the best of her.

Pan Am in many ways reminds me of the premiere episode of Desperate Housewives. If it has been a while since you’ve watched, do yourself a favor and rematch. You’ll notice some similarities. Bizarre, overbearing music paired with multiple story lines and a confusing plot twist.

Opportunities aside, the show is one of the best scripted series I’ve seen in years. Overnight ratings were solid and I hope the show’s momentum keeps going, just like an airplane jettisoning down the runway. Pan Am is right at home on ABC’s Sunday evening lineup.