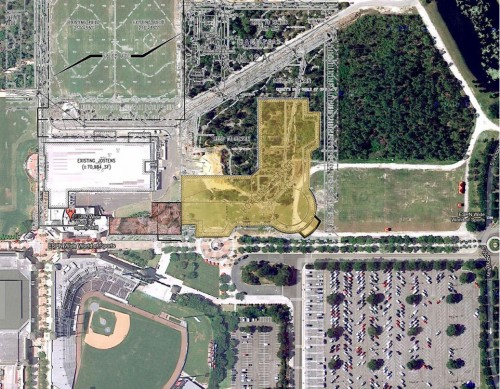 According to a report on WESH, a local Orlando news station, Disney has filed plans for the 100 lane bowling center that is planned for ESPN Wide World of Sports Complex. As you can see in the overlay I worked on above (click for a larger version), these plans reveal the huge size of the building required to house 100 lanes. It’s nearly twice the size of the giant Josten center.

Also on the plans is a building marked future development that would connect the bowling center with the ESPN Sports Grill and Playstation Center (is that still open?).

Disney has also recently announced that bowling center called Splitsville will be coming to Downtown Disney. Many thought that signaled the end of the ESPN WWOS center, but Disney insists they will build it. It had been delayed due to difficulty for the original partner to get funding during the down economy. Either that challenge has been met, or Disney feels confident enough to move forwarded without a partner. The plans filed include a build-by date of January 1st 2015. So if they’re going to build it, the will need to get started soon.

Having a world class destination for bowling tournaments is a great move for ESPN WWOS. Plus it will be the one, non-dining, venue there where regular theme park guests will be able to participate in a sport. Are you looking forward to having world class bowling at Walt Disney World? What other sports that everyone can play would you like to see come to ESPN WWOS?