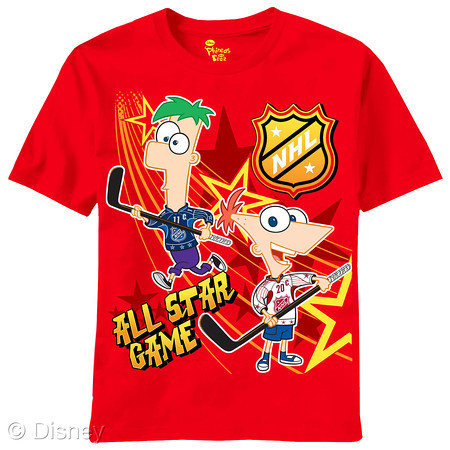 “Just like the game of hockey, Phineas and Ferb is successful because it appeals to a diverse demographic—kids and grown-ups, boys and girls,” said Stephen Teglas, vice president and general manager of Fashion & Home North America at Disney Consumer Products. “We look forward to bringing the humor of the series to NHL fans with a fun campaign at arenas and through clever products that showcase our two brands. It also seems like the kind of adventure that Phineas and Ferb would imagine.”

Phineas and Ferb airs on Disney Channels and Disney XD channels in 169 countries and in 35 languages. In Canada, it airs on Family Channel, a premium, commercial-free network and member of the Astral family.

In this Emmy Award-winning and BAFTA-nominated music-filled, animated comedy series, ingenious Phineas Flynn and his resourceful stepbrother, Ferb Fletcher, happily set out to conquer boredom and make every day of their 104-day summer vacation count. Whether it’s creating a new invention or building the most amazing roller coaster the world has ever known, Phineas and Ferb innovate all summer long. The smart, sophisticated and good-natured comedy features high energy action and imaginative witty humor for kids and families. Throughout the escapades, they’re accompanied by Perry the Platypus, their seemingly mindless family pet who, unbeknownst to all, has a double life as suave secret Agent P, deftly battling the evil Dr. Doofenshmirtz to save the world. Meanwhile, older sister Candace is aghast at her brothers’ bold antics and makes it her life’s work to tattle on them to Mom and Dad, though somehow she can never seem to catch them red-handed.

Find Phineas and Ferb merchandise on DisneyStore.com. Your purchase supports The Disney Blog.