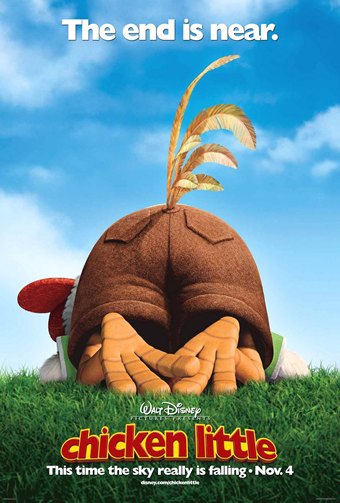 In 2005, Disney found itself in a position it was not very familiar with. It needed to play catch-up, and prove that even though it was late to hop on the bandwagon, it could still do it better or just as well as its competitors. But Disney had never tried this method before, and it knew it had to compensate somehow.

An entire year before the film’s release, marketing for Chicken Little began in full force. The character Chicken Little’s first appearance was at the Macy’s Thanksgiving Day Parade as a 60 foot, 500 pound balloon. Not bad for a chicken, eh? From there, the promotions continued. Disney made partnerships with McDonald’s and Sears, and advertised not only on kids programming, but also on adult content, like Saturday Night Live and Comedy Central. On Halloween, Disney distributed Chicken Little trick-or-treat bags, and featured Chicken on ABC’s Monday Night Football in a conversation with linebacker Ray Lewis. 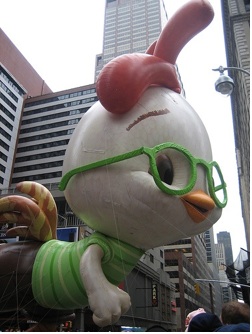 By the time Chicken Little actually hit theaters, it had been completely over-exposed, and according to an anonymous Disney animator, “there [was] just no way that the finished product  [could] actually meet the expectations.”. While it did very well at the box office, as the first film to debut at number one since Tarzan (1999) and the largest opener for a Disney animated film since The Lion King (1994), it was not very well-received by critics and viewers. It only scored 36% on RottenTomatoes.com, which paled in comparison to The Incredibles’ 97% and Shrek 2’s 89%. Despite desperate efforts, Disney Digital 3-D had not lived up to its competitors.

After the appointment of CEO Bob Iger and merger of Disney and Pixar in early 2006, it was time for Disney to try its hand again at 3-D. This time, though, it left the creativity to Pixar and decided to instead rely on the popularity of one of its most original animations, The Nightmare Before Christmas (1993). 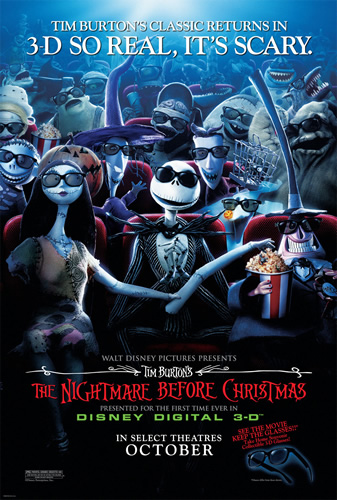 Over-exposure turned out to be the worst approach that Disney could have taken, and I have to say Disney has done a great job of avoiding it ever since. In this case, however, because Nightmare already had a substantial fan base, there was simply no need for another ambitious marketing campaign. Instead, they went with a few simple tactics, including a new trailer, poster, and minimal online advertising, each of which was clever and captured the essence of what makes this film so unique.

The next release for Disney Digital 3-D is going to be The Lion King (1994), in theaters this September. Yet, we are less than two months away from its release, and it seems the only kind of promotions that exist thus far are one 30-second advertisement, a poster, and a trailer.

Obviously, Disney has decided to go with a subtle marketing strategy similar to that of Nightmare, which means we can expect not to see much more about this film marketing-wise. But personally, despite the lessons learned about Disney 3-D advertising from Chicken Little, I am a little disappointed. Don’t get me wrong – I get it. 3-D is a mega-money-maker, so why waste time and effort when we know people will pay the extra few dollars to see one of their favorite animated films in theaters? But for a brand that has produced a film every year since 2005 underneath the largest media conglomerate in the world, doesn’t a 5-year-old simple marketing strategy seem a little elementary?

It is a rare occasion for me to say, Disney, you should have done more. But, Disney…you should have done more! Create a little buzz, generate some hype, and try to make up for the fact that you are making dramatic changes to a movie that has been unconditionally loved in 2-D. If it wants these 3-D films to not only be something new, but something new AND exciting, it should treat them that way. While the Chicken Little approach is a bit much, there needs to be a middle ground, and so far, Disney just hasn’t found it.

Do you think Disney should stick with a strategy that is simple yet effective, or apply the same large-scale creativity to marketing all of their assets?

Amanda (@amandajcorreia) is a Boston-based marketing student with an immense passion for film, travel, blogging, and pretending she’s a Disney princess (http://amandajcorreia.wordpress.com/).

Previously: The Lion King coming to Disney DVD in Oct.