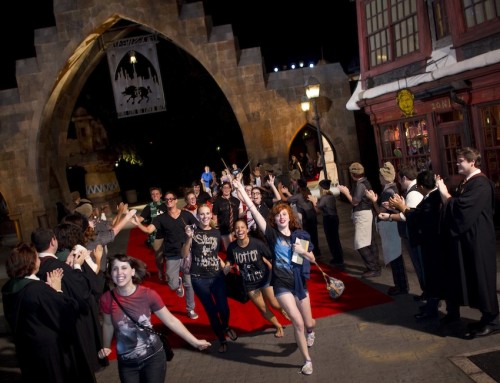 Well, this is cute, and a great idea. This morning, the Universal Orlando Resort surprised guests who attended the midnight film screening of “Harry Potter and the Deathly Hallows: Part 2” at AMC Universal Cineplex 20 with exclusive, complimentary access to The Wizarding World of Harry Potter. Immediately following the film, these select guests had The Wizarding World of Harry Potter all to themselves from 3 a.m. to 5 a.m. Reportedly all 20 theaters at the Cineplex were showing the film.

Moviegoers were notified of this once-in-a-lifetime opportunity following the film. After celebrating in the theaters, more than 3,000 excited guests walked a red carpet to the place where the wonder, excitement and adventure of the Harry Potter films will live on. During their visit, guests experienced the wand choosing them at Ollivanders, tasted Butterbeer, toured Hogwarts castle and enjoyed many other experiences found only at The Wizarding World of Harry Potter.