This morning I had a very unique opportunity at peeking behind the curtain, into the minds of a couple of Pixar’s finest: Toy Story 3 Director Lee Unkrich and Producer Darla K. Anderson. These two were engaged in an hour-long, in-depth conversation with two New York journalists at The Hamptons Film Festival’s Animation Master Class Panel. The program began by showing us the opening sequence from Toy Story 3. After the clip faded, the screen rose to reveal the panelists and moderators. They went on to discuss a range of topics about the film including some of the challenges they faces. Here are some of the more memorable moments and stories:

– Unkrich emphasizes story and emotion as being the most important aspects of their films. He describes their role at the studio not as animators or filmmakers, but as storytellers.

– In describing the pressure brought on by continuing the Toy Story legacy, Unkrich stated that he “woke up every morning wanting to vomit over the side of the bed” and didn’t want the third movie to be compared to ‘The Bad News Bears Go To Japan’.

– Anderson has never thought of Pixar as a children’s film studio, rather just a film studio that produces films for everyone and are kid friendly. They agree that the most risque line in TS3 was Barbie complimenting Ken on his ascot. They faced some criticism, but it Unkrich says it was “too good to pass up”.

– Unkrich tells us that the biggest challenge of producing an animated feature versus live action is being able to create the “illusion of spontaneity”. He goes on to tell us that technology isn’t what makes the film so beautiful, it is the level of artistry of the animators using the technology that makes it look so fantastic.

– Anderson tells us that they wanted the audience to find Bonnie’s character to be “super appealing”. They wanted us to be happy and proud that the Toy Story gang ended up with her. Unkrich reveals that Bonnie’s drawings of Woody and the gang were done by his own children and that many of the drawings on display at Sunnyside were done by children of Pixar employees. 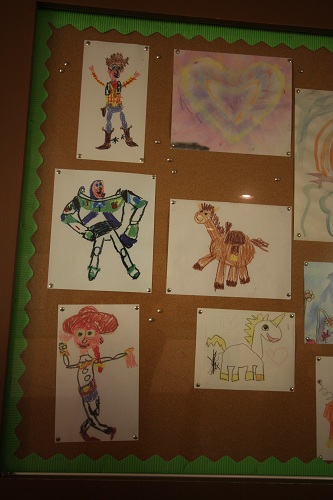 Children’s drawings from Sunnyside Day Care on display at the The Magic of Disney Animation at Disney’s Hollywood Studios.

– Unkrich is happy with the final cut of the film but if he could make one change it would be to include BoPeep in the opening sequence somehow. They wanted the opening sequence to be huge and over-the-top since this is the first time in over ten years that the audience gets to ‘play’ with their favorite toys. The original plan was to reveal the teenage Andy right after this scene, but later it was decided to create a montage of home movies leading to the present day Andy. By the time this decision was made, it was too late to go back and incorporate BoPeep into the sequence. 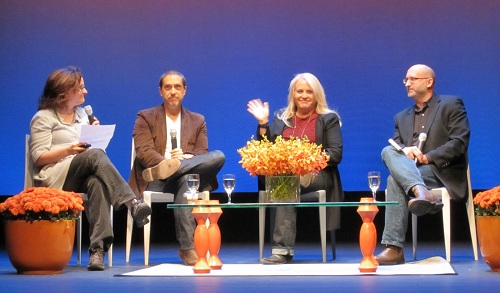 – Both panelists agreed that the actors don’t get enough credit for the amount of work they put into voicing the characters. Most actors stick to the script but some do a lot of improving. Unkrich tells us a story about his favorite improvised line by actor Michael Keaton (voice of Ken):

– In how to handle the trash compactor scene, Unkrich wanted the characters to “face the situation with quiet dignity” by holding hands and baring their demise instead of them jumping around and panicking.

– Before showing us the final scene of the film in which Andy donates the toys to Bonnie and drives away, Unkrich tells us a personal story about the last time he saw his grandmother before she passed away. She had been suffering with cancer, and on his last day of visiting her, he drove her to a restaurant where she was attending a friends birthday party. Before he left the restaurant, he looked at her and saw how happy she was with her friends. He took a “mental snapshot”, closed his eyes, turned his head, and walked away. He knew it would be the last time he saw her and wanted to keep that memory of her. Unkrich told this same story to his animators in order to capture these emotions for Andy. He felt that by doing this, he could create a more powerful and realistic emotion for the character. 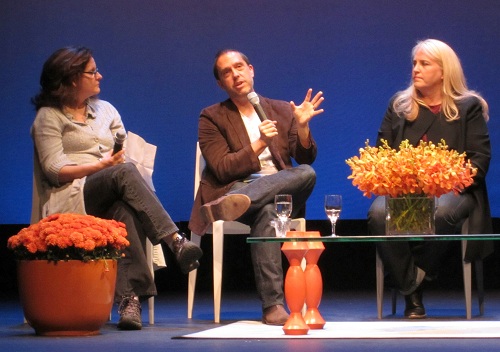 Unkrich and Anderson close the session by telling us that they plan to be working on another Pixar film together and that they “complete each other”.

The only things that weren’t covered that I was curious about was their thoughts on the controversy of 3D films in theaters and at home, Lotso’s role as a cute and cuddly villain that theme park goers line up to meet, and if Mr. Tortilla Head or Mr. Cucumber head will get a spin-off film. I was also surprised that the November 2nd Blu-Ray/DVD release was not plugged at all. Overall, I was very happy that I was able to attend this event and share all of these great tidbits with you!

When he’s not a mild mannered reporter for the Daily Planet, Dan can be found on Twitter.