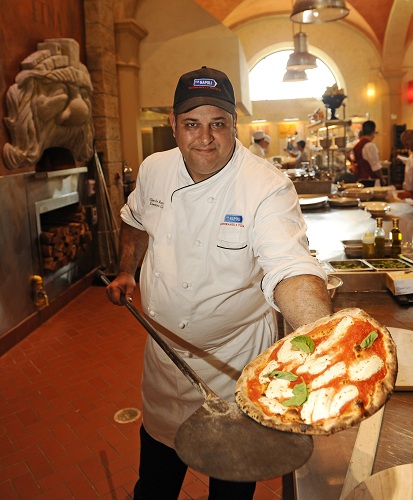 Although one is tempted to say Disney’s theme park restaurants exist separately from the rest of the world, they can live and die on the quality of the Chef and their line. So it’s comforting to know that Charlie Restivo, the new Executive Chef and Head Pizzaiolo at Via Napoli comes from one of the better traditions of pizza craft in the world. I thought you might be interested in his bio:

To say Charlie Restivo is serious about pizza is an understatement. He started making pizzas at age 13 in a small shop in Queens and has worked towards perfecting his craft ever since. From 1996 to 2010 Charlie Restivo was the Head Pizzaiolo at Naples 45 in New York City, where he and his staff made authentic Neapolitan pizzas. Prior to joining the staff at Naples 45, he spent 5 years working in the kitchens of Mezzaluna and Mezzogiorno. Charlie also did some consulting work in Sicily, opened the pizza kitchen at Naples 25 (the Long Island-offspring of Naples 45) and is now the Executive Chef and Head Pizzaiolo at Via Napoli in the Italy pavilion in Epcot® World Showcase at Walt Disney World® Resort in Lake Buena Vista, Florida.

From start to finish, Restivo perceives the process of creating pizza as an even balance between art and science. For instance, the type of water used when mixing the pizza dough is key. Via Napoli uses water similar in chemical composition to the water of Naples, Italy. It has been found to create the best consistency for the dough made in the kitchen. The flour consistency is important as is the density and type of yeast used for the perfect low-gluten dough. The varying hot spots which change daily in Via Napoli’s three pizza ovens (named Etna, Vesuvio and Stromboli) greatly affect the cooking time. The freshness of the toppings is always taken into consideration, and Charlie coordinates with his staff on what they should be.

Restivo’s fondest food memory revolves around a family trip to Sicily, where generations of Restivos dined on pizzas he made in his Sicilian grandmother’s 100 year-old oven.

2 thoughts on “EPCOT welcomes Chef Charlie Restivo at Via Napoli”

previousDispatch from Disneyland: my book project.
nextThe Artistry of Pinocchio