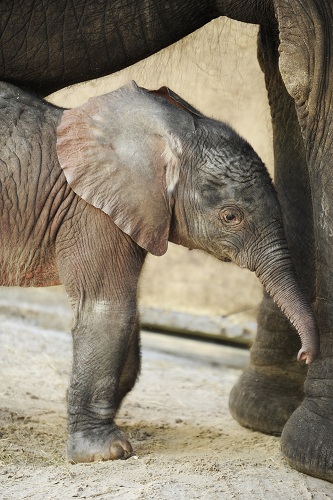 The elephant herd at Disney’s Animal Kingdom just expanded – by about 288 pounds. That amount represents the weight of the newborn female calf born late last night.

Twenty-two-year-old Donna gave birth to the herd’s fifth offspring after gaining more than 400 pounds during a 22-month gestation. This latest addition, which has yet to be named, is the second calf for Donna, which gave birth to a female calf, Nadirah, in 2005. This birth raises the number of elephants in the Disney’s Animal Kingdom herd to thirteen, including five males and eight females.

“Elephant births are among the most amazing and complicated processes in the animal kingdom,” according to Jackie Ogden, Ph.D., vice president of Disney’s Animal Programs. “A team of dedicated animal professionals have worked with the expecting mother attentively throughout the course of her pregnancy. At this point, we’re optimistic for the calf’s likelihood of survival and are thrilled that both Donna and her calf are doing well.”

With assistance from the animal care team, the newborn, whose first tentative steps are becoming stronger and more confident, is now successfully nursing from her mother. Donna has been getting to know her calf, gently touching the young animal with her trunk. The next critical milestone is for the calf to continue the bonding process with her mother who will teach her important lessons and protect her as she is introduced to the rest of the savannah herd in several weeks.

Donna became pregnant through artificial insemination in July 2008 and received extensive pre-natal care throughout her pregnancy. Zookeepers added more exercises to her daily routine, hoping to strengthen the muscles needed during the birthing process. In addition to regular ultrasounds, veterinarians and elephant managers monitored her hormone levels on a daily basis to help them determine when she would give birth. Labor appeared imminent last night and the animal care team remained with her to provide round-the-clock care until the female calf was born May 20 around 11:30 p.m.

Disney has been at the forefront of efforts to better understand and care for endangered elephants. Disney’s Animal Kingdom is part of a breeding program coordinated by the Association of Zoos and Aquariums (AZA) that is focused on sustaining the elephant population in North America. AZA’s Elephant Species Survival Plan has called for a five-fold increase in African elephant reproduction efforts – using both natural and artificial breeding methods – in order to create a self-sustaining elephant population among North American zoos and wildlife centers

· Depending on the calf, it could take several days for the calf to coordinate trunk movements. Initially, it may only be able to wave it in the air, suck on it or trip over it. Typically within a week the calf has gained enough control to begin picking up small objects and food.

·  Suckling up to 12 liters a day, baby elephants may depend on mother’s milk for up to three years, although they can be weaned at two years of age.

·  By the time a calf is nine months old, 40 per cent of its diet is vegetation. The calf learns how and what to eat by watching the older elephants.