Manatee’s Rehabilitation at Epcot Over, Released back into wild 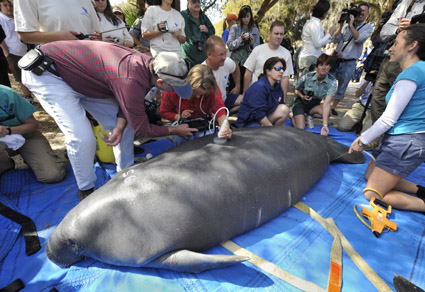 Disney’s Animal Programs team helps take final measurements and readings as they prepare to release a manatee into his natural habitat at Blue Springs State Park in Orange City, FL.

A manatee, named “Bock,” was released Tuesday February 24th 2009 into the warm waters of the St. John’s River. The manatee, rescued as an orphan from the St. John’s River in 2001, arrived at Epcot in 2003 weighing about 500 pounds. At Epcot, marine mammal experts weaned him from a bottle and began feeding him a diet of romaine lettuce, fruits and other vegetables. “Bock” now weighs more than 1,000 pounds and is approximately eight years old.

Prior to his release, he was fitted with a satellite tracking belt to follow his movements and allow for behavioral observation. His progress will be monitored by the Manatee Rehabilitation Partnership (MRP) in which Disney’s Animal Programs has been involved since 2001 when the partnership was established. The MRP is a cooperative group of nonprofit, private, state and federal entities that monitors the health and survival of rehabilitated and released manatees. (Photo courtesy Disney, Gene Duncan, photographer)