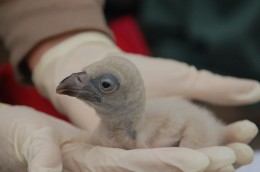 Disney’s Animal Kingdom Lodge welcomed the birth of two Ruppell’s Griffon Vultures earlier this month. They are the first hatchings of this threatened species at Walt Disney World Resort. Each chick weighed less than six ounces and was about eight inches long when hatched.

Over the past twenty years, the population of Ruppell’s Griffon Vultures has been declining. This reduction led the International Union for Conservation of Nature to raise the status of this species to threatened. Members of Disney’s Animal Programs Team hope to increase the species population and generate more awareness of the challenges these birds face.

When grown, each new-born vulture could reach sizes close to three feet in height , with a wingspan of nearly eight feet, and can weigh 15-20 pounds. They are also known for their high-flying skills, being among the highest flying bird on record, once spotted at an altitude of over 37, 000 feet in the skies of West Africa. Ruppell’s vultures can fly more than three miles in six minutes and are able to stay in the air for as many as six to seven hours a day.

Ruppell’s vultures are highly social; they roost, nest and gather to feed in large flocks. While they are generally a quiet breed, they may become vocal at the nest and during feeding time. The Ruppell’s vultures pair up for life, which may be forty or fifty years.

More about Disney’s Animal Care Program on The Disney Blog