The set of The American Idol Experience.

I knew The American Idol Experience is in previews and I heard via a twitter from someone who had auditioned and made it into the 2pm show that there would be shows on Saturday, so I drove out to the Disney’s Hollywood Studios to sit in on three Saturday afternoon shows. I’m glad I did.

There is much to be happy with about the attraction, and, as always, a few rough edges that need to be cleaned up. But, hey, that’s what Soft Openings are for. Right? 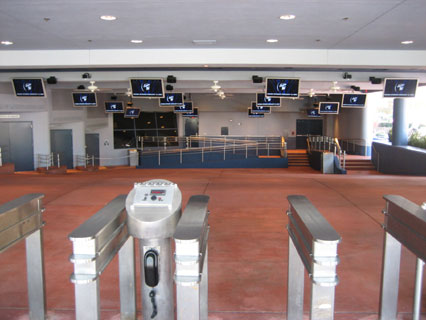 The pre-show queue. All the TVs are branded “American Idol”

Many will dismiss The American Idol Experience (AIE) as over-produced Karaoke, and they would certainly be correct in that observation when the show is at its worst. But when the Guest performers are into it, the audience gets involved, and the judges are supportive of the performers and interacting well with the host, you have the best sort of Disney magic – the making of a participatory experience where everyone feels a little better for having been there to see it.

AIE reached that plateau in the first show I attended (the 2pm show that the @pharoe was in) and in the finale show, but failed to make the magic happen at the 4pm show. The shows were technically almost exactly the same, the biggest difference between was how involved the audience was in the transformative moment. 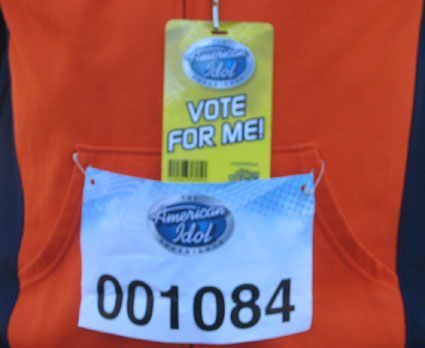 Those who audition and make it into one of the elimination shows are given this lanyard to wear around the park all day.

Many things contribute to the recipe for a magical show. Including the right portion of each in every show will be the challenge here. In the kitchen are the the show “producers” who choose the talent and set the performance order and encourage the Guest performers during rehearsals. Some of the ingredients are contributed by the warm up host who excites the crowd and encourages participation during the pre-show. Everything is presented to the audience by the host and judges who are involved in the pre and post performance moments. But the main course is the talent, charisma, and skill of the Guest performer. Finally, the audience has to be willing to get involved in the moment of recreating the feeling of American Idol. Put all those ingredients together and Disney has a hit on their hands. But if a couple of those are absent like a fallen souffle the audience experience might be a a little flat?

For the preview days at least, when there was no advertising in the park maps and the national campaign has yet to launch, the audience mix was skewing toward the middle in terms of age. There was plenty of ipods, iPhones, and texting going on. Pre-teens and young children were few in number, but teens and young adults were plentiful. Pretty much the same mix I imaging enjoys watching the show on TV. 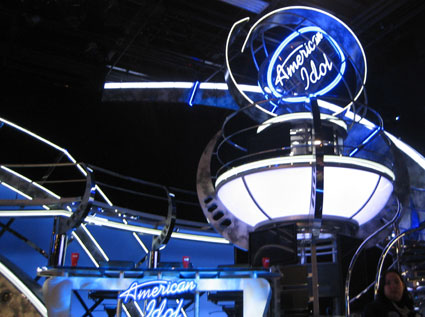 More from the set, including the judge’s table.

Also, each show was only filled to about half of the 1000 seat capacity of the theater. I expect that to change, you will have to show up early to get in to most shows and there might actually be some difficulty getting into the finale show on busier days. Only 8000 Guests will be able to experience the attraction inside the theater. But there is a big screen TV outside, which could be use to entertain overflow crowds when the show when the seats fill up.

One thing that has become clear is the time commitment that will be required for Guest performers. The morning audition process takes about one and a half hours for those who make it through to a show (and some of those who don’t). Each elimination show is about another hour and 45 minutes. While the finale show requires around 2 hours of rehearsal and performance time. So, if you do plan to audition you could be contributing more than five hours of your day to the American Idol Experience. The elimination round contestants I spoke to were all happy they made it on stage, but questioned the time they lost in the parks. I think contestants who are serious about going on to audition for American Idol will be more willing to spend that amount of time in one attraction. Plus, if you get the ‘Dream Ticket’ five hours at Disney’s Hollywood Studios are better than 12 hours in queue for the real audition.

The first seven shows of the day are elimination rounds where three Guest performers compete. There were only three of these shows on Saturday. Each show is about 25 minutes long, but there is a fun little preview show in the queue that happens about 30 minutes before the show. So get there early and enjoy your 15 seconds of mini-fame. There is also a crowd warm-up once you’re seated inside. I think a successful pre-show, both in the queue and in the theater, is one of the key ingredients to a great American Idol Experience. So it should not be skipped. 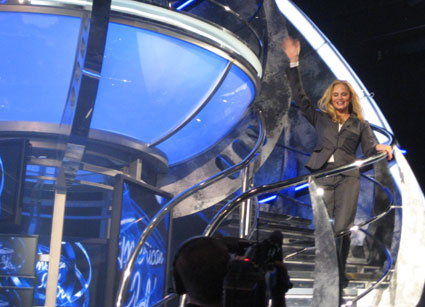 The initial entrance of the host.

I don’t want to go into too many details of the show, but the general idea is to recreate the experience of participating in a live taping of an episode of American Idol. So there is a host in the role of Ryan Seacrest (although he also appears via tape), and a panel of three judges. Each judge takes on a role. They are either Randy “you go dog”, Paula “oh that was so nice”, or Simon “what was that?”. After each Guest performer sings they’re critiqued by the judges and then at the end of the show the audience votes and the winner gets put through to the finale show at the end of the day.

There were only three of these shows during the day, but they needed seven performers for the finale show. So the other four performers were either Guests who auditioned and were put through right to the finale, or Cast Member ringers who were called into fill a spot. I’m not sure if this practice will continue once the attraction is out of previews. But I do know Cast Members are not eligible for the dream ticket, so if possible, Disney will most likely try to have a Guest on stand-by to perform if one of the seven doesn’t show. A couple Guests on stage during the elimination show.

The finale show attempts to recreate the feeling of the season finale from the TV version. But because of logistics there are a few differences. The biggest is that there are seven Guest performers to get through and vote for, where as during the TV version, all the voting is done and it’s just the final two on stage. Also the real season finale has lots of former American Idol winners and other celebrities performing. There’s none of that in Disney’s version. Instead the American Idol Experience finale show plays more like an extended version of the elimination show.

I had a great time at the Finale show, but to me it also had the most opportunities for improvement. With seven performances to complete, much of the extra elements from the elimination shows are eliminated. But for some reason they choose to keep many of the same jokes. Also by the time the TV show gets down to the last few shows, the judges have their favorites and are much more complimentary of the performances, offering tips for improvement instead of critiques. At AIE’s finale, I didn’t see any difference. 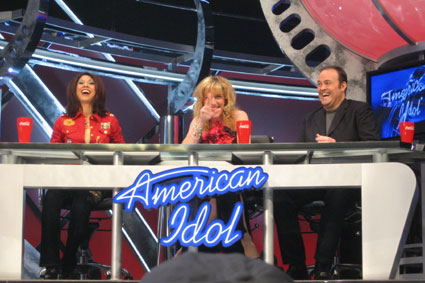 Judges at the table. They weren’t laughing at the performer, I think.

With the finale show at the American Idol Experience, Disney has to walk a fine line between entertaining those audience members who have returned to see if their favorite performer from the elimination show they attended wins, and informing and involving audience members who have chosen to attend the finale, but didn’t see any of the earlier shows. So that explains why there is so much overlap. But I think the Disney version could still incorporate more elements of the TV version finale while not losing those for whom this is their first show. So wrapping it up… although the idea of having the American Idol brand at Disney initially seemed anathema to me, it has grown on me. My first glimpse at the American Idol Experience, even during the previews, shows me that Disney has a real gem here. With some careful polishing, it will shine for years to come. 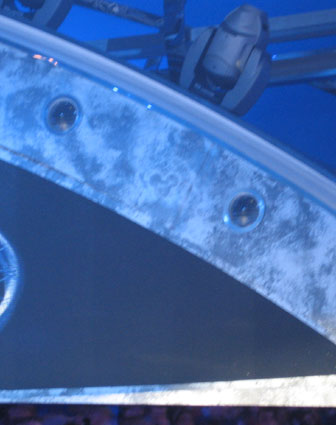 Look closely and you’ll discover another American Idol on the set. Yep. A Hidden Mickey.