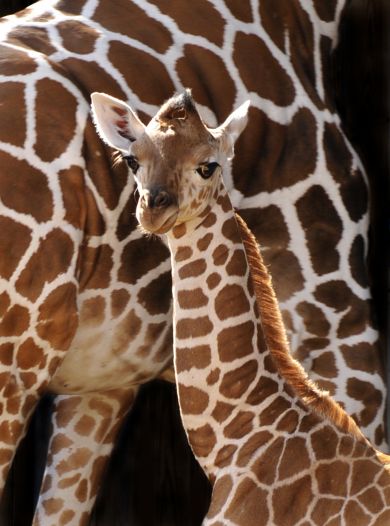 Everybody’s wondering what is in the giraffe’s drinking water at Disney’s Animal Kingdom?

Walt Disney World Resort is having a bit of a baby boom this year with the birth of a fourth baby giraffe. Entering the world at 6-feet tall and 155 pounds, Bonsu delighted members of the animal programs team at Disney’s Animal Kingdom in the early morning hours, Sunday September 28.

Bonsu’s name is inspired from the Akan language in Ghana and means biggest and strongest fish in the sea. He is the fourth male, and 11th giraffe overall, born at Disney’s Animal Kingdom since the park opened in 1998. He is also the second calf for his mother Nikki, whose first offspring, a female named Rori was born in 2006. She can be seen today on the savannah at Disney’s Animal Kingdom Lodge.

When these giraffe calves grow up, each of them could be as tall as 15 – 18 feet. The newest calf and his mother are doing fine and are expected to rejoin their herd on the savannah at Disney’s Animal Kingdom in the next few weeks.

previousLife On Mars Premier: Out Here In The Fields
nextABC to go in search of Aliens, Better Ratings