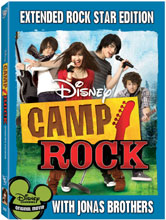 When The Walt Disney Company saw that The High School Musical series was a surprise hit and it appeared that musicals were “hip” again with young audiences, Disney knew they just had to tap into that gold mine. One of the ideas they came up with was a Movie Musical called “Camp Rock”. It would star some of the Disney Channel’s young talent, other than the well known Miley Cyrus, and with any luck it would bring in good ratings and make some money along the way.

Well was Camp Rock a success? Absolutely! It debuted as the number two movie ever on The Disney Channel and it’s stars Demi Lovato, The Jonas Brothers, Alyson Stoner, and Meaghan Jette Martin have all become bigger names with fans of Disney’s tween offerings.

So now the summer camp smash-hit Disney Channel Original Movie Camp Rock is out in an Extended Rock Star Edition on DVD and Blu-ray from Walt Disney Studios Home Entertainment. The DVD features well known recording artists the Jonas Brothers, and is packed with “Too Cool’” bonus features including a never-before-seen exclusive extended edition.

I am obviously not the target audience for this film. But it functioned well within the type of TV movie genre that has been a success on The Disney Channel in the past. Nothing goes too far, no boundaries are pushed. Just a solid effort from a team that knows what their audience wants. That’s teen based fun, good music, and popular actors. Camp Rock: Extended Rock Star Edition DVD certainly has a lot of each of those.