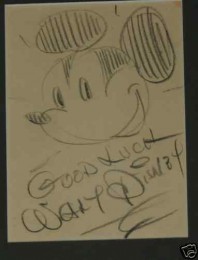 There’s a bit of animation history up for bid over on eBay right now. It’s a collection of character drawings and autographs from Walt Disney and a few of the artists who accompanied him on his famous South American tour in 1941. Other artists include Norm Ferguson and Franklin Thomas.

These are actual drawings signed by the real Disney artists and Walt Disney, himself. These drawings were made for my grandfather and grand aunt. The Disney artists and Walt Disney went to south America to gather information for the movie the Three Caballeros. On their way back they were on board the Santa Clara which had left Valparaiso Chile on its way to Miami Florida. The Disney group was on their way to Miami for the Grand opening of the movie Fantasia in October of 1941. During their boat ride to Florida my grandaunt was teaching them Spanish then a romance was started between My Grandaunt and Franklin Thomas with my grandfather as chaperon.

What a great story to go with these drawings. They’re currently asking $50,000 for the collection of 7 drawings with 11 chracters, which I think is a bit much. But perhaps they’re open to offers. (Link)