Back in April I wrote about Disney’s Animal Programs important work on Elephant vasectomies as part of my coverage of the 10th Anniversary of Disney’s Animal Kingdom. Disney has recently announced that the team from Disney’s Animal Programs will be leading an international coalition of veterinarians, conservation groups, zoos, universities and private industry to return to Africa and continue the important program. This time the team expects to perform laparoscopic vasectomies on eight bull elephants at the Pongola Game Reserve in Kwa-Zulu Natal, South Africa. 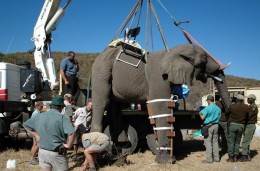 Elephant overpopulation in wildlife parks and reserves in southern Africa is a growing problem that can have devastating effects on the natural habitat as well as other animal species that live there. Wildlife officials in several countries are considering culling many elephants in order to control the population growth.

“Elephant population management is one of the most critical conservation issues facing many areas of Africa” said Dr. Mark Stetter, Director of Veterinary Services at Disney’s Animal Programs and principal investigator. “Through our recent successes, elephant vasectomies have been an effective tool at several wildlife reserves to reduce the need for culling, and help support the ecosystem. As an accredited member of the Association of Zoos and Aquariums (AZA) we are committed to pioneering creative solutions to problems facing all wildlife by using the technology and tools available to address conservation and wildlife issues.”

Elephants are unique among most mammals since their testes are internal and require abdominal surgery to perform a vasectomy, making the traditional procedure nearly impossible to do in the wild. This innovative new procedure involves state-of-the-art medical equipment specifically developed for this project and scaled from human to elephant proportions. The elephant laparoscopic equipment was built by the Karl Storz Company at their headquarters in Germany. Laparoscopic surgery allows the surgeon to view the internal organs on a monitor and use long thin instruments to perform the surgery. With this type of minimally invasive surgery, the risk of infection is decreased, the procedure time is significantly reduced and there is less post-operative discomfort.

Wildlife scientists and rangers will use telemetry tracking collars placed on the elephants during the procedure, to closely monitor the animals and ensure there are no post-operative complications. All bull elephants that have had this procedure in 2006 and 2007, have fully recovered and shown no side effects from the procedure. A vasectomy effectively sterilizes the bull elephants while maintaining normal hormone levels and normal elephant social behaviors.

“Disney’s Animal Programs commitment to the animal population is truly admirable,” said Jeff Hunt, President of Covidien’s Patient Care and Safety Products global business unit. “Minimally invasive surgery has been implemented for years in people and more recently available for pets – and now even wildlife. We are proud to participate with this coalition’s innovative approach to solving a complex conservation issue.”

This is an international collaborative project that brings together conservation groups, universities and private industry including Disney’s Animal Programs, Colorado State University/College of Veterinary Medicine, the Zoological Society of San Diego, Covidien, the Karl Storz Company, Catchco Africa – Wildlife Specialists, the Veterinary College of South Africa at Onderstepoort and the Pongola Game Reserve to address this complex problem. The long-term goal is to have in country trained specialists and elephant laparoscopic equipment to be able to provide this service to wildlife parks throughout Southern Africa.