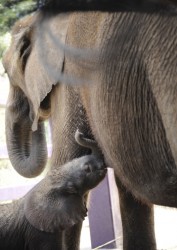 “African elephants are considered endangered and are challenging to breed,” according to Jackie Ogden, vice president of Disney’s Animal Programs. “This elephant birth is significant, not only for the herd and species, but also for the dedicated team of professionals who have been working with Moyo attentively for the past two years since the early stages of her pregnancy and round-the-clock since the elephant began to show signs of an imminent birth.”

Both calf and mother appear to be doing well according to veterinarians and elephant managers, who are optimistic about the calf’s likelihood of survival. With assistance from the animal care team, the newborn became comfortable using his “newly-discovered” legs and began nursing successfully from his mother soon after birth. He is already feisty and very active.

Moyo became pregnant through artificial insemination in September 2006 and received extensive pre-natal care throughout her pregnancy. Zookeepers added more exercise to her morning routine, and in addition to regular ultrasounds, veterinarians and elephant managers monitored her hormone levels on a daily basis to help them determine when she would give birth. Labor appeared imminent late last week and the animal care team remained with her throughout the process until the male calf was born Saturday evening around 8:20 p.m.

Disney’s Animal Kingdom is part of a breeding program coordinated by the Association of Zoos and Aquariums (AZA) that is focused on sustaining the elephant population in North America. AZA’s Elephant Species Survival Plan has called for a five-fold increase in African elephant reproduction efforts – using both natural and artificial breeding methods – in order to create a self-sustaining elephant population among North American zoos and wildlife centers.

previousShanghai, Disney both deny theme park to be built there
nextMore WALL-E News