Behind the scenes at Apocalypto 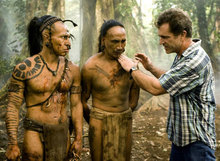 Mel Gibson’s epic Apocalypto is due in movie theatres this Friday the 8th. It remains to be seen if crowds will materialize for this film based on Gibson’s past films, the odd nature of this film, and Gibson’s recent personal failings. I know I’d really like to see it on the big screen. But I don’t get out to see many movies these days.

Reviews are coming in and they are generally positive with most pointing out the extreme violent nature of the film (more violent than Braveheart). But that’s appears to be Gibson’s take on reality.

There’s also this great story in the LA Times that looks at some of the extreme measures the crew had to take to finish the film. Also American Indians are happy about Gibson’s casting of indigenous people in the film. So there is some good publicity surrounding the film.

For great indepth coverage visit the Apocalypto Watch blog where you can find clips, interviews, and media links.